Changes to the Free Version of Fusion 360

Fusion 360 made a lot of changes recently to their personal/free license. It has caused quite a stir in the maker/DIY community. Let's talk about how this affects you and if Fusion 360 still makes sense when you're making your next project.

At the Make or Break Shop we make things, but we know that breaking them is part of the process along the way. And man... Fusion seemed to break a good bit of stuff recently.

Disclaimer: I have a few paid Fusion 360 courses as well as free tutorials. You might say I've got a biased opinion, but I want to create content that is the most useful as possible. My main focus is in the furniture design space. Many of the changes have big effects for those working with robotics as well as [[3D Printing]]. We will get into those areas but know that I'm coming from the perspective of a woodworker first.

Disclosure: All opinions expressed here are our own. This post may contain affiliate links that at no additional cost to you, I may earn a small commission. Read full privacy policy here.
Score

The Good
The Bad
Buy Online
Make a Bed in Fusion 360
Price:
$ 0.00 USD
Want a quick look at designing and modeling furniture inside of Fusion 360? In this tutorial we will go through my process for creating a bed with built in storage.
Check it out! 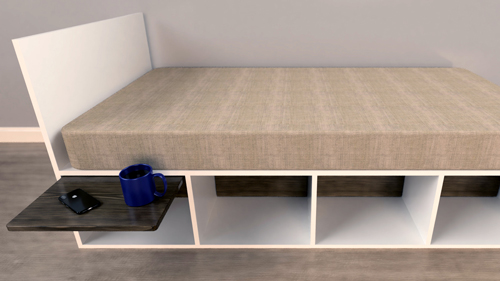 Before we get deep into the details let me give you my current recommendation. If you are using the free version of Fusion 360 primarily for designing furniture or parts to 3D Print then Fusion 360 is still my top recommendation for design software. Even with all the current limitations.

Autodesk has seen some abuse of their free license where it is being used for business purposes. The majority of these changes make it more difficult to scale what you're doing-especially if you're optimizing for time.

As you'll see with most of the changes they won't affect you. The real confusion has come around how they were communicated and why they have decided to make these changes.

This article is broken into two parts:

1. What are the actual changes and what do they look like inside of Fusion.

2. Controversy on how those changes were communicated.

Changes to the Fusion 360 Free Plan

This chart is taken from a recent blog post from Autodesk. It's the easiest way to quickly see what's going on.

Here are the changes:

There are currently no changes to the following areas.

An active document is anything you can directly edit. This is like a normal design, open it up and start modeling and making changes.

The only difference with inactive documents is that you can't edit those. Now you still can make edits but you'll have to make one of your ten active documents inactive to do so. This feature isn't rolling out until 2021 and how this will work is still being finalized.

The interactions of how you do this is still being worked on, and any existing experience around archiving designs from Fusion Team is not indicative of what this new interaction maybe, that’s why it’s slated for January 2021. We hope that you understand that we are trying to put limits in place to stop commercial misuse, while still enabling the vast majority of hobbyists to continue to design and make with little to no impact. - Autodesk

Now, you still can have more than 10 parts referenced in a big assembly. Those can be brought in like normal you just won't be able to make live edits to those without going through active/inactive switcheroo.

Also, PDFs, images, presentations, and spreadsheets don't count towards the 10 active document limit. It looks like that limit is just on a new document/design.

Supported export file types on the free version will include STEP, STL, OBJ, F3D, F3Z, IPT, FBX, SMT, SKP, DXF (from a sketch). This removes DWG, DXF (not from a sketch), IGES, SAT, and STEP.

It's important to note that this does not apply to IMPORT file types. None of these are changes.

To save a DXF from a sketch right-click and select Save as a DXF. That file can then be brought into whatever laser software or vector editing software you are using. If you are creating cut lists for furniture then the design can be printed or laid out as needed in additional software.

The ability to have multi-access milling, probing, automatic tool changes and rapid feeds are being removed.

Let's break down what these do:

This includes 4, 5, and 3+2 axis milling. This does NOT include the more standard 2 and 3 axis milling setups. These are the ones common in most hobby CNC shops. Machines like the Inventables X-Carve or Shapeoko. Even larger machines like those from Avid CNC won't be affected.

If you're going to start to rotate things, you will need larger industrial machines as well a pro license from Fusion to create tool paths for them.

Again, you'll need a more advanced machine than most hobbyists have to use this. The idea behind all of these changes is they are removing the key areas that help speed up your workflow. Time optimization is very important in a business context but not as much for personal use where time doesn't directly equal money.

Usually, this will show up in the linking area when creating a tool path. These are designed to help save you time when machining. Now there is a workaround (kind of).

So you can increase your cutting feedrate to increase the speed of your linking move. But that will more than likely result in damaging your bit or your part. So the top speed is now limited to the cutting feedrate. This will impact larger machines that have large distances to travel or situations where you are batching out tons of parts.

But since Fusion exports GCode you could also manually include faster speeds in the linking moves directly in the GCode itself, you just can't bake that into the post-processor inside of Fusion.

2D drawings are now limited to single sheet and print only. This is the biggest impact on my current workflow for furniture design since I create plans to go along with many of my furniture models.

In the past, you could make multiple pages for a single design, but that is now limited to one page. When I create plans for a piece of furniture, I often need more than 1 page to show all the different pieces as well as highlight dimensions on various joinery. That ability has become a lot more difficult.

The main workaround that I plan on using is still creating all the different views with dimensions on 1 sheet but then move those views on top of the page when it's time to export. It's adding some friction, which I get is the point of these changes but this one seems a little unnecessary.

And speaking of export that has been limited to print only. But you can still install a Print to PDF program and create a PDF through the normal print dialog box.

At that point just like the DXF sketches, you could bring that PDF into another program for further layout and design.

The change is now local rendering only. Before there was an option for cloud rendering but that has been taken away. The big downside is that you can't offload your rendering from your machine. So you'll take up a good bit of system resources during the rendering process.

You'll no longer have access to this environment. This would allow you to conduct things like stress and thermal testing on your designs. Again for my situation, I've never had to use this but this could be a deal-breaker for you depending on your situation.

This environment is also going away. The generative feature does seem like a cool one. You can apply a few parameters and Fusion will create the most optimal geometry for you. Again I haven't needed to use it for furniture design.

Fusion is removing the ability to use extensions in this update. There was a good bit of confusion around this which comes down to how things are named. Extensions are NOT Plug-In's or Scripts (which I use a good bit), rather they are extended functionality that Autodesk has built directly that can be "unlocked" with a paid purchase.

I've only seen these in the manufacturing environment and you would only need those if you're in a production and business setting.

The controversy around Changes to Fusion 360

Again, other than the limitation to the design environment these changes won't affect how I use Fusion. I think the majority of the controversy came through how it was announced.

Like most people I first found out about the change with this email:

The overall tone of the email set many people off as well as creating general confusion around what is changing. I know I felt like Fusion was moving out of the DIY/Maker community into a bigger focus on the businesses that are paying to use the software.

This makes sense, but Fusion 360 has always been positioned as a collaborative resource with the maker/DIY community. We've used the program over the year and feel real ownership over feedback in its development.

There was a ton of blowback which led to the Autodesk team reversing its decision around the removal of the STEP format. This is an especially big deal for the 3D printing community since this was the only format that preserve the parametric information in your designs so they could be edited in software other than Fusion.

The decision to reverse that came in an interview [[Lars Christenson]] had with the VP of Fusion 360. To many Lars is the face of Fusion in the maker community, and has provided tons of great free tutorials on YouTube.

Watching that interview I get the sense that Autodesk isn't wanting to move out the DIY/maker market, but they wanted to apply changes that would limit the abuse of the software.

Now there isn't anything to keep them from making more changes, and that's the risk we all take using any free software. For now, I feel confident (enough) in continuing to use the program. And I even find enough value in it to move into a paid plan in the future.

But even you stay with the free option I do believe it's the best software out there for designing furniture as well as the more general maker community.

But if you are looking for alternatives then lots of people have been talking about Free CAD. Here is a great intro tutorial on it.

Check out the cheapest CO2 laser on the market! Full review of the OM Tech 40W Laser
November 10, 2020

Let's break down the brand new Ortur Aufero CNC Engraver. Let's compare it to older units and see if this could be a good sub $300 option to add CNC capabilities to your shop.