Thank you! Your submission has been received!
Oops! Something went wrong while submitting the form.
By subscribing, you agree to get emails from me, Brandon Cullum. I'll respect your privacy and you can unsubscribe any time.

One of my favorite things to do as a kid was to swing, but I thought there was one way to make it better ... make it an X-Wing from Star Wars.

The X-sWing was built from cheap construction grade supplies you can get at the big box store. It might not stand the test of time but should at least last through the summer!

I wasn’t working off any type of plans for this project so I had to wing a good bit of it. The only thing I knew for sure was the general size I wanted for the seat. I got these measurement based off of the size of my daughter. I was able to make a general template on a piece of cardboard and transfer it to 3/4 in plywood.

Both sides of the chair were cut out from a single piece of plywood using a jigsaw.

Strips of plywood were used to connect the seat frame together.

Since there was a slight angle between the bottom and the back those pieces were cut at an angle found from an angle gauge before everything was glued and brad nailed together.

The main structure of the X-Wing was built with a combination of circular disks and ribs. I then used 1/4 in underlayment plywood to skin the entire thing. This is kind of similar to how real planes are made which helped to keep the weight down vs. using solid 3/4in plywood for the entire build.

Using blue painters tape I determined the general shape of the disk and then cut some pine strips to size to create the shape.

The frame of the disk was connected with screws and glue.

The entire disk was skinned on the front and back with 1/4 plywood.

I used a jigsaw to cut it flush to the frame.

To connect the disks together I first attached pieces of pine strips there were not cut to size with brad nails.

These were between all corners of the disk. I could then figure out the angle to cut these disks with an angle gauge and cut their final geometry on the miter saw.

I used pocket holes to connect the ribs to the disks with wood glue.

I used 1/4in plywood underlayment to skin the entire body. The strips were cut out using a circular saw and attached with brad nails.

The wings were made with the same process as the general X-Wing frame. They are basically a large skinny rectangle that only has plywood skin on either side

The gap in the middle allows me to remove the wings if I ever needed too in the future.

I first built small brackets on the underside of the wings that were attached to the larger frame. These serve as small supports to the wings and were screwed directly into the wings.

One wing spans the entire distance as a single piece. I cut the second wing in half with gave me the ability to reconnect them with pine strips as well as to the previously installed wing.

Nothing was glued together with lets me unscrew everything from the middle and pulling the wings apart in case I needed to make the X-Wing smaller for storage.

I then skinned the area around the wings with 1/4in plywood and used a jigsaw to notch out around the supports.

I used iron-on edge-banding around the edges of the body. This helped cover up all the gaps and mistakes I made along the way!

Step 9: Making a Cardboard Template for the Nose

I first tried to figure out a way to make the nose out of wood. All the angles were getting crazy and nothing was completely square. Instead, I used scrap pieces of cardboard and tape to figure out the general shape.

Step 10: Making the Nose Out of Foam

Using cardboard as a template I cut all the pieces of the nose out of foam mats.

These are really easy to cut with an Exacto knife. By cutting them at an angle you get a great surface to connect two pieces together with contact cement.

I filled any gaps with caulk and sanded the nose with a Dremel and sandpaper.

While this won’t stand the test of time (especially outside) I did cover it with Plastidip to help harden the surface and protect it from the elements.

I used a primer and grey spray paint to cover the entire X-Wing.

Looking back I wish I had just used acrylic paint with a roller since I went through a ton of cans!

The red accents on the wings and the nose were made by masking them off with green painters tape and covering everything else with craft paper.

This was by far my favorite part of the entire process! I used some dark walnut stain with a dry brush to add gunk/space dirt to the entire X-Wing.

I used a few reference pictures to see where I should build the weathering up. I also imagined this flying around to figure out how the wear and tear would build up over time.

The engines were made from 8in Concrete forms and 4in PVC pipe.

I connected these together with a plywood circle that was cut out on my X-Carve CNC.

I could have used a jigsaw or bandsaw to get this shape as well. The PVC/wood/concrete form was connected together with screws.

On the front of the engine, I used another thing circular piece to mimic the exhaust intake. I screwed 2 small pieces of plywood inside the Concrete tube to give the front circle piece something to reference off of.

It was attached with a few drops of CA glue.

The engines were painted with an aluminum spray paint and then weathered like the overall body.

I did use some black spray paint to darken up the inside of the engine as well as add some exhaust stains to the front and back.

The engines were attached with a few screws through the side of the Concrete form into the body of the X-Wing.

Two Bolts were attached infant of the seat and two bolts behind. I then hung the X-Wing with metal chain and carabiners to our outdoor swing set.

Depending on the weight of the person getting in you might need to adjust the positing of the bolts so the center of gravity of the entire vehicle is directly in the middle of the hanging supports.

This has been one of those crazy dream projects for a while. The only thing I regret is not making it even bigger so I can get in! 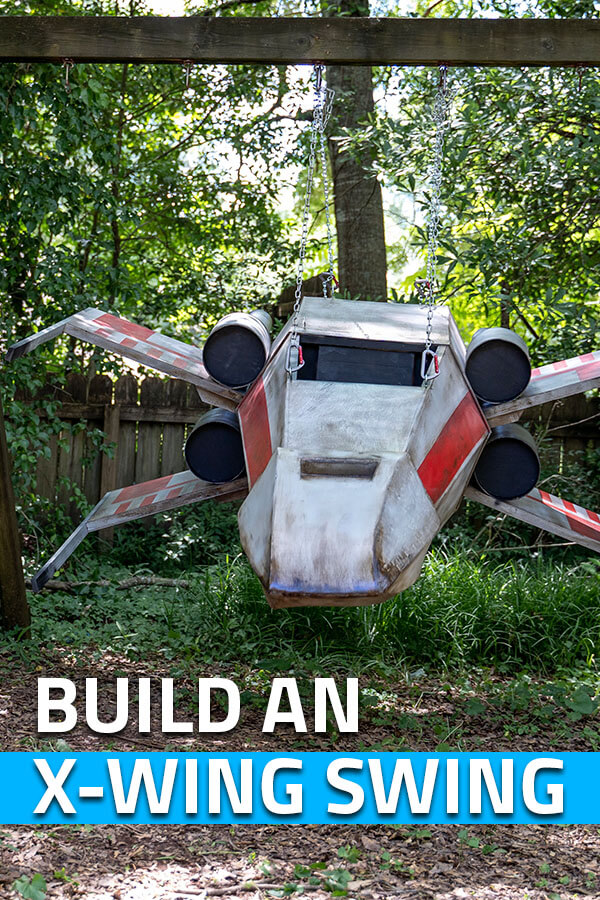 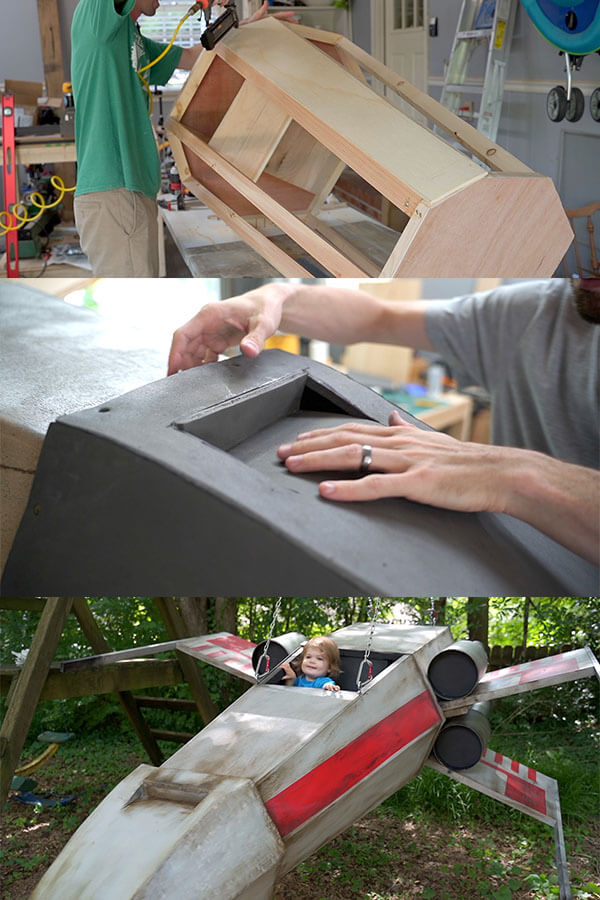 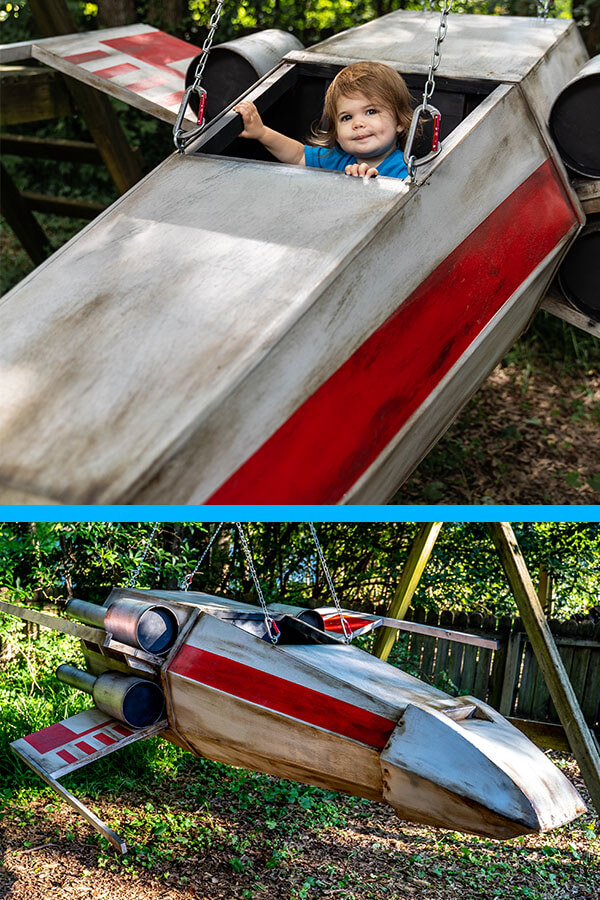 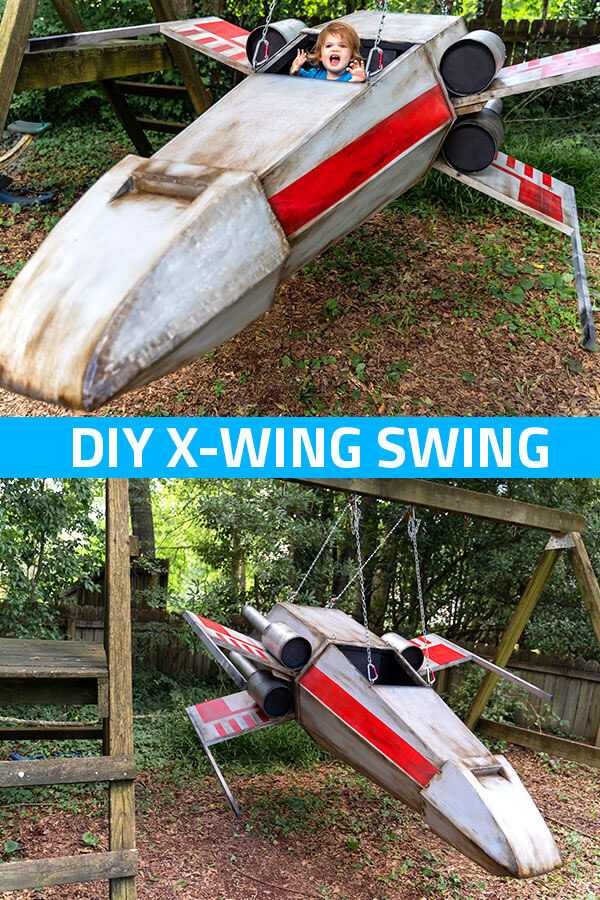